Sometimes life take a dump on you

sometimes life takes a dump on you. You can’t help it, but you can choose how you want to deal with it.

I was walking home and felt a small pat on my shoulder. I didn’t think much of it at the time but when I got home I saw I was what happened.

I was shat upon.

Most likely a bird (could have been a bat too). It hit the lapel of my jacket and my shirt’s collar. Inches away from my neck and face. I washed it quickly and most likely it will not leave a long lasting stain.

I thought about putting this behind me. After all, no real damage was done, and I didn’t even waste much time cleaning it. 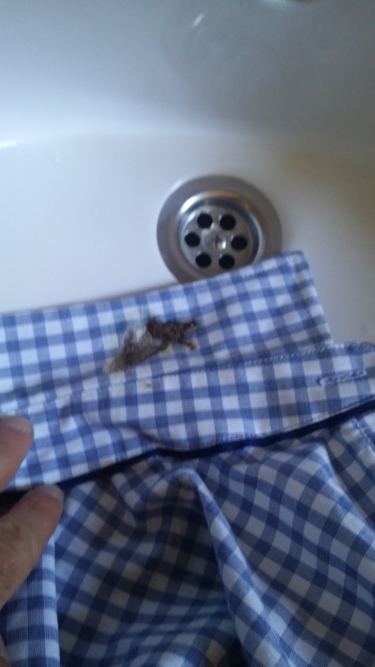 But then I thought- perhaps there’s more I can gain from this miserable incident. Later that night I told my 3 years old daughter what happened. She looked baffled… how can someone soil her dad like that? She knew that bats and birds dump litter our car (and sometimes our laundry). But the idea that a bird can actually shit mid-flight still looks weird to her. But that wasn’t was I was going to focus on. I told her these thing happen, and could happen to her too. And there was nothing anyone can do to prevent it.

I also told her I was lucky. lucky how?

and while she didn’t really appreciate the joke (after all, if you’ve never seen a cow’s dung this wouldn’t be funny you too), she intuitively understood I looked at this unpleasant situation with a good sense of humor.

Several days later when we’ve talked about this, she remembered most of the details and recapped the incident with a laugh, saying “a bat sat on daddy’s shoulder and made a poopoo” and burst into laughter.

So now I know that if this would ever happen to her she will take it with a pinch of self- humor.

And this is all a father could hope for -not for her to get hit by sh*&%t , but for her to be able to handle it in a cool manner.